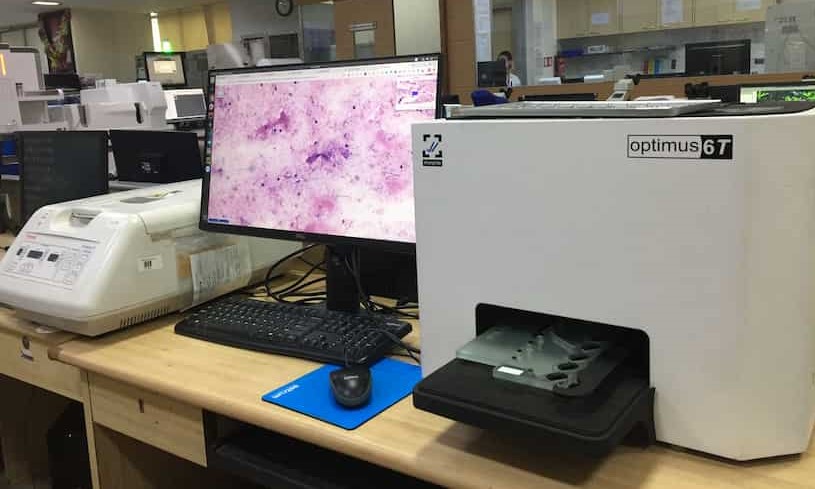 Nucleus Technologies is a high throughput path-lab founded in 2018 which exclusively caters to the Immunohistochemistry (IHC) staining requirements of over 50 hospitals and path-labs around the region. They receive tissue blocks from their customers, stain them with special stains, mount them  and ship them back. They handle more than 500 slides a day.
‍
The process involves two steps which can take upto 2 weeks. Let us take the example of a Breast IHC panel. A pathologist working for one of the customers wants to diagnose a possible case of breast cancer. However, the hospital she works for doesn’t have IHC staining facilities. So, she sends a tissue block over to the people at Nucleus for staining.
‍
After receiving the tissue block, the Nucleus team stains a slice of the tissue with ER-PR and sends it back to the pathologist. Once she receives the stained slide, she has to estimate whether it fulfills her requirement. If she is not able to confirm a diagnosis, she may have to ask the Nucleus team for another stain. This time, it would be HER2neo. Every leg of the shipping process requires 3 days. So, each cycle requires about a week. If the pathologist decides to go for the third  stain, it could take longer. In case of an unsatisfactory result, they have to repeat the process and things can even draw out to a full month.
‍
It was in this context that the turn-around time was identified as an area of improvement. However, a definite solution wasn’t known to the Nucleus team. Let us look at two of the alternatives that were available. First, Nucleus could change the mode of delivery, from ground to air. However, road transport is the fastest option available under the current circumstances, simply because logistical delays would remain the same in both the cases. Second, they could open multiple labs closer to their customers. This would shorten the logistics time but would be against the idea of centralisation to reduce cost of staining. IHC is a sensitive process which is best done at a centralized location under expert supervision.
‍
In May 2019, the Nucleus team came across Morphle labs and realized that a whole slide scanner could be a possible solution for their problem. With that in mind, Mr. Sridhar from Nucleus reached out to the Morphle team to explore this possibility. They understood the nature of the problem, and proposed an Optimus 6T scanner which could load a batch of 6 slides in one go as a solution. With a Morphle scanner, the Nucleus team could send digital slides instead of physical ones. In fact, the only physical transportation needed would be sending the tissue blocks. Rest of the movement can be done digitally, which is an instantaneous process.
‍
Now, this would be great for the Nucleus team. But, would the end customers be comfortable in shifting to purely digital slides? To test this, the Morphle team shared sample digital slides to some of the top pathologists that Nucleus catered to, and asked for their opinions. Needless to say, they loved the image quality and had no qualms in shifting to digital slides for diagnosis and reporting.
‍
This got the Nucleus team convinced and they placed an order for the Optimus 6T whole slide scanner. Also, Nucleus wanted a scanner which would fit into their mission of being fast and affordable, without compromising on quality. A Morphle scanner happened to fit in really well into the above mission. Morphle’s scanners, being surprisingly affordable, did not burn a hole in Nucleus’s finances.
‍
After installation of the scanner, the transformation was phenomenal! The turnaround time for one cycle dropped from 3 days to same-day delivery. Within a week, they started receiving praise for the speedy delivery of work. To add to that, to the Nucleus team’s surprise, their revenues increased within 6 months. With the reduced turnaround time, more and more customers signed up for Nucleus’s service, leading to a 50% increase in revenue in 6 months.
‍

Would you like to cut down your turnaround time and increase revenue too? Get in touch with us!
Get Your Own
Whole Slide Scanner
Contact Us
Thank you! We will get in touch with you shortly.
Oops! Something went wrong while submitting the form.